Nature is sending us a clear message. We are harming the natural world – to our own detriment. To care for humanity, we must care for nature. We need our entire global community to change course.

It is time for all of us to think again what we buy and use. It is time to adopt sustainable habits, farming and business models, keep safe the wild spaces and wildlife and commit to a green and resilient future.

It is time to work together, it is time to put nature where It belongs-at the centre of our decision making. The role of our cities and regions is very important.

Urban areas occupy less than 1 per cent of the Earth’s land surface but house more than half of its people. Despite their steel and concrete, crowds and traffic, cities and towns are still ecosystems whose condition profoundly marks the quality of our lives. Functioning urban ecosystems help clean our air and water, cool urban heat islands, shield us from hazards and provide opportunities for rest and play. They can also host a surprising amount of biodiversity. 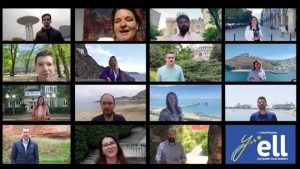 European Local Leaders created a video to pass the message across Europe. Our message for the World Environment Day is clear “It Is time for Nature, it is time for the future”.

If we are to safeguard the environment for future generations, we must take urgent action now to implement development policies, incentives and actions. It is through working together that we will succeed in delivering a sustainable, healthy, and prosperous future for all.

“IT IS TIME NATURE, IT IS TIME FOR THE FUTURE&quot;

The squandering of the planet’s natural resources for human well-being mistakenly based on the overproduction, accumulation and consumption of material goods has been a fact so far. This human greed has led to the detriment of spiritual values ​​and has acted against the moral order of things.

Production of goods requires the use of energy which even today comes from polluting sources (fossil fuels), which are responsible for the greenhouse effect resulting in violent climate change. Global warming is not just an environmental problem. It is a moral and political problem. It is related to the way resources are allocated; thus it is also a matter of social justice. One can say that those least responsible for climate change are those who suffer the worst consequences.

The “Europe Green Agreement”, as the new European Strategy announced by European Commission’s President Mrs Ursula von der Leyen, is inspiring and in the right direction. However, it should have been established much earlier, in order to balance the polluting industrial revolution of the 20th century. However, if we dedicate 21st century to the Green Revolution, we may prevent the collapse of our planet, as long as common efforts are established all over the world.

The green revolution will lead us to a growth that will return more than it demands. It shows the way of how to change our way of life and work, our production and consumption patterns, so that human societies can prosper.

Sun, air, water and other renewable energy sources are enough to meet global demand. Investments in research, innovation and technological developments will give new perspective to the production, distribution and storage (new batteries, hydrogen, etc.) of energy; and consequently millions of new jobs.

As a new politician, I am an ardent supporter of the above strategy, by always keeping in mind that the planet has reached its limits and if we won’t act NOW and DECISIVELY, it will either destroy us or will drive us away; when technological developments allow so.