The European Young Leaders represent an alternative infrastructure of leadership, a new generation of leaders able to inspire action and generate change. Their passion, their diversity of backgrounds and opinions, and their innovative thinking together create the right formula for generating fresh ideas to build a more forward-thinking Europe.

Our European leaders provide alternative perspectives from outside the institutional and political frameworks to EU decisionmakers writing the rule book.

The European Young Leaders also play the essential role of helping to reconnect people with and rebuild trust in politics by engaging a wider community around key EU policy issues that need a whole economy whole society approach to progress fast. They are scientists, artists, journalists, entrepreneurs, astronomers. They are citizens and their thinking is not bound by multilateral or frameworks, or burocracy.

They help take Europe out of Brussels, in their own countries and cities. They are facilitating citizens’ participation in the creation of a more equal, innovative and inclusive Europe and help build a European identity.

From champions of the arts and tech entrepreneurs, to leading activists and Olympic athletes, meet the new young leaders.

Nektarios is a Greek politician with a passion for good local governance. He currently serves as the President of the European Local Leaders, a committee of young European politicians that have been elected at the regional or local level. The initiative aims to promote creativity and share pioneering ideas among the new generation of locally elected officials throughout cities across Europe, with a focus on climate change, environmental protection, smart cities and new technologies. Nektarios is also the President of the Union of Young Local Councillors of Greece, which brings together newly elected regional and municipal councillors, governors, deputy mayors and mayors in Greece and organises events on the role of local governments in the development of smarter and greener cities. 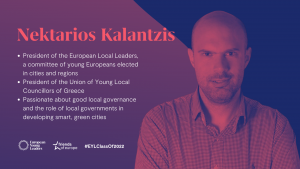